I hope that 2020 is going well for you. Although it is early in the year, many of us are already hard at it and many are feeling the financial strain. We believe that the economy is going to improve over the next few months and are looking forward to that.

It is important, in good times and tough times to watch you rands and cents and to buy smartly. Have a look at an article from MoneyWeb below that speaks to resale value of your vehicle. I am sure that you will find it interesting.

Please also have a look at some of our specials and amazing offers. As always, let us know if there is anything that you need that you can’t find. We are here to help.

Drive safe and be in touch.

Vehicles that hold their value.

Not all vehicle models and brands are created equal.
This is according to an analysis of the actual price a specific vehicle achieved on auction, as a percentage of the original list price for that same vehicle one year earlier.The resale value of a vehicle is important because it has a direct impact on its total cost of ownership and the ability of consumers to finance the acquisition of a new vehicle.
True Price MD Darryl Jacobson said on Monday it analysed which 2018 model vehicles achieved the best resale value, measured against their original list price, during 2019 – something never done before in South Africa.
Jacobson explained that True Price is able to produce this data because its team attends bank repossession auctions throughout the year to document the prices achieved.
With data from thousands of vehicle auctions on its system, it’s able to provide highly scientific, accurate vehicle evaluations.Jacobson added that the analysis only included vehicles that had travelled less than 60 000km.
Consumer choice
Kriben Reddy, head of auto information solutions at TransUnion Africa, said consumers base their buying decisions on how well a particular brand is represented in the market, and how well that particular model range behaves on the market.
He said consumers tend to be very wary and sift out unpopular brands, resulting in those vehicles’ poor resale values.
Jacobson believes the colour of a vehicle also plays a role, a view shared by Reddy, who said popular colours can increase the vehicle value albeit marginally, as can the rarity of the vehicle.
Optional extras add value to the vehicle while it’s in the first few years of its lifecycle. However, Reddy clarified that when the vehicle is older and technology evolves further, the options tend to be less significant.
For example, park distance control or navigation systems in a four-year-old car today will not add any value, as vehicles are now equipped with 360-degree cameras and older navigation software is outdated.
Reddy added that vehicles that are built to customer specifications with extensive options are priced accordingly, but at the time of sale the seller may only be able to monetise the popular options that were fitted.However, some popular options not taken up by the customer could have adverse effects on a vehicle’s selling price, he said.
Jacobson said True Price only attends bank repossession auctions because these auctions have a 95% success rate on first-time sales on auction.“It gives a good gut feel of what is going on,” he said.Based on this data,
True Price came up with the list of the top ten resale value winners for the 2019 calendar year.It found Volkswagen to be the biggest winner, with three vehicles in the top ten, while Toyota and Kia also performed admirably, each with two vehicles making it onto the list.
Hyundai, Renault and Isuzu each have one vehicle listed.
The top 10
(and percentage of original list price achieved on auction)
• Volkswagen Tiguan (87.07%)
• Kia Picanto (81.27%)
• Volkswagen Polo Vivo (80.42%)
• Volkswagen Golf (80.06%)
• Kia Rio (80.00%)
• Toyota Hilux (78.56%)
• Toyota Fortuner (77.73%)
• Isuzu KB/D-Max (76.41%)
• Renault Kwid (73.3%)
• Hyundai Grand i10 (73.26%)
This ranking differs from the list of top ten selling vehicles in South Africa in 2018. The top sellers then were: Toyota Hilux, Ford Ranger, VW Polo, VW Polo Vivo, Nissan NP200, Toyota Corolla/Auris/Quest, Toyota Quantum, Isuzu KB, Toyota Fortuner and Hyundai Grand i10.
Jacobson admitted that the VW Tiguan was not among the biggest sellers but is very popular and desirable, while a model like the Mercedes-Benz A-Class unfortunately did not do well because very few are repossessed and True Price’s actuaries insisted that a minimum of seven of the same vehicle model had to be sold to achieve a meaningful comparison. 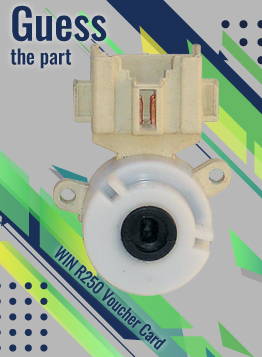 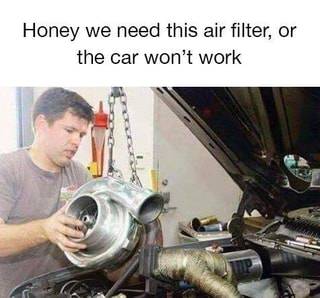 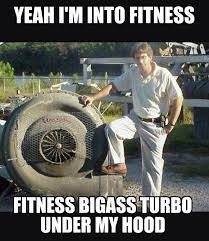 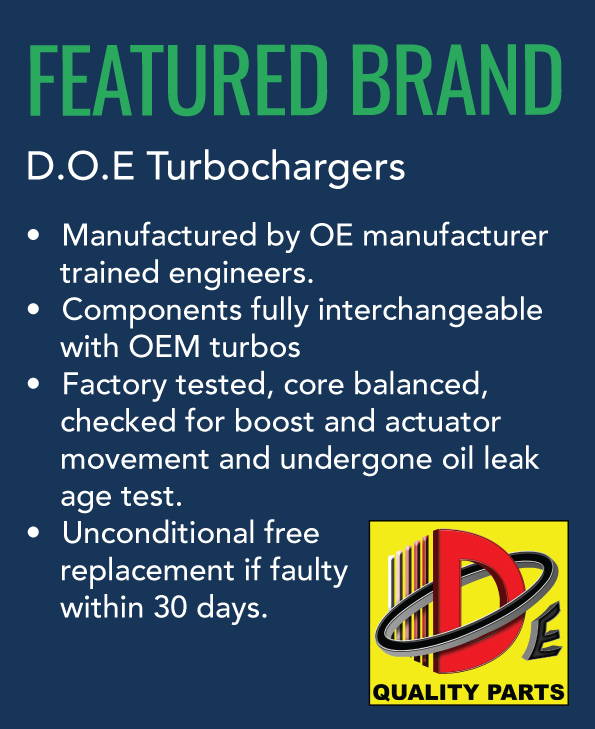 Knowing when to replace your turbocharger!
Turbochargers are rather genius inventions that recycle waste exhaust gas to boost engine power, allowing for smaller, lighter engine design and increased overall fuel efficiency. Even though it sounds relatively straightforward, adding a turbo to an engine comes with its own set of problems. After all, it’s another component that requires maintenance. It also has a pretty intimate relationship with the engine, so trouble for one can mean trouble for both.
As with most things, turbo engine failure gets worse the longer it remains unchecked. Consider the following signs and causes of failure if you’re looking to get the most out of your turbo.
Why Turbochargers Fail?
Perhaps the most common mistake is to view a turbocharger as an add-on component to an engine, like one would an alternator. Therefore, many people assume, when the turbo fails, it is the turbo’s fault and a new unit is needed. In truth, the vast majority of turbo failures are due to external factors. Have a look at the list and statistics below, provided by Turbo manufacturer Yuuhatsu.
Insufficient lubrication - Contributing to 40% of failures
• Oil Starvation
• Deformed, bent or clogged oil lines
• Undersized oil filter
• Dirty oil filter
• Contaminated oil
Foreign objects into turbine - Contributing to 25% of failures
• Pieces of burned valves
• Pieces from broken combustion cups
• Casting fins from manifolds
• Chips from exhaust ports
• Pieces from scuffed and broken pistons
• Improperly installed gaskets
• Nuts and washers dropped into the exhaust system
Foreign objects into compressor - Contributing to 15% of failures
• Pieces of the broken or loose air filter
• Pieces of rubber or wire from the air intake hose
• Nuts, bolts and washers dropped into the intake system
Excessive heat and over boosting - Contributing to 15% of failures
• Improperly de-rated at high altitude
• Incorrect timing
• Reduced air inlet caused by clogged air filter, and collapsed hose
• Air leaking at air intake
• Leak from exhaust pipe
Improper handling and installation - Contributing to 5% of failures
• High loads applied to turbo housings due to improper piping
• Excessively heavy piping that is supported only by the turbocharger
• Excessive vibration due to improper mounting
• Turbocharger being dropped onto shop floor
• Holding the actuator as the handle
As is evident above, the majority of turbo failures are due to external factors. It follows therefore, that these factors have to be addressed before fitting a new turbo, or the new turbo will suffer the exact same unfortunate fate.
The Warning Signs
As with most components that make up a vehicle, turbos are not immune to failures nor breakdowns. Below, we explore six common symptoms of turbo problems, so you can tend to them before any further damage is done to your vehicle.
1. Poor acceleration/ Loss of Power - One of the most significant symptoms of a failing turbo you should notice is lack of overall power. The car may appear sluggish and not accelerate quickly or produce the usual amount of power while on the road.
2. Irregular or excessive exhaust - A crack in the turbo housing, or seals which have worn out, can cause oil to leak into the exhaust system. When this leaked oil burns, it will result in characteristic blue or grey smoke. This smoke is more visible when the turbo is running. Hence, if you notice excessive smoke when revving the engine, chances are your turbo is faulty.
3. Increased Oil Consumption - If you notice that your car is using more oil than usual, it could be an indication that your turbocharger is leaking oil into the manifold. It can eventually lead to oil starvation and to the turbo failing.
4. Check engine light - While the “check engine” light is an all-encompassing warning sign that will not point specifically to anyone mechanical issue, it can signify a turbo fault or failure. An illuminated check engine light should never be ignored and indicates further inspection is necessary to determine whether a repair or replacement of the turbo is required.
5. Lack of boost - Some of the turbochargers, more likely sports cars, have a boost gauge, which displays the amount of boost that the turbo is producing. If your car is one of those, then you can just look at the boost gauge to determine if the turbo is creating the right amount of boost and if it is rising much slower than usual, a replacement turbocharger may be necessary.
6. Loud shrieking noise - If a turbo is failing, it may produce a noise when the boost is running. The noise comes directly from the engine and sounds like a loud siren or shriek, which tends to get louder as the problem worsens. Any unusual noise under the car’s bonnet is worth investigating, especially if the sound accompanies any additional turbo failure symptoms.
In Summary:
Turbochargers, like all mechanical components, have a life span. A life span which can be prematurely cut short by insufficient lubrication or the ingress of foreign objects. Should your turbo fail, the cause of failure must always be identified and rectified before fitting a new turbo.At Start My Car, we have a comprehensive range of replacement D.O.E turbochargers, which are interchangeable with your OEM turbo. As always, have a look on our website, or contact us if you are unable to find it online, and we would be more than happy to assist you.