I hope that you are healthy and well. COVID-19 continues to perplex us, as the number of people infected, across the country, increases daily. Industry is keen to get going but the reality of the danger is an ever present worry.

As a company, Start My Car is deeply cognizant of this fine line and is well positioned balance these priorities.

Please have a look at our offerings and products in order to make sure that you get the products that you need. To add to this, with e-commerce open to trade, we are able to deliver even more efficiently.

Please also have a look at the below article that details some of the regulations around vehicles. It is a constantly evolving scenario and we invite you to contact us should you require any information at all about trading in this field.

In the interim, please continue to adhere to the regulations (even if they seem to be strange) and let’s get through this, together. 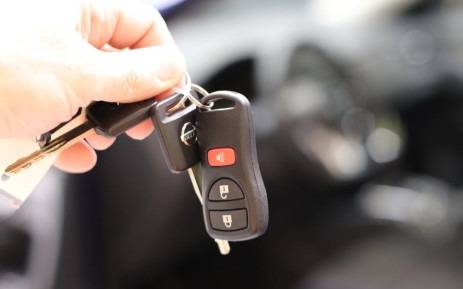 Car sales are now legal again under new Level 4 rules, and servicing too

As of Tuesday night it is possible to buy and sell cars again in South Africa, and to get vehicles serviced – under strict conditions, especially at first.
The rules, published in the Government Gazette by trade, industry and competition minister Ebrahim Patel, also covers motorcycles, trailers, caravans, and agricultural implements. Also now allowed is the import and export of those vehicles, wholesale trade in them, and the movement of cars to dealerships.
Under "phase one" of the reopening of the motoring industry, car outlets may only have 30% of their staff on site, but with no more than one customer or employee for every nine square metres of floorspace (though small businesses may have a minimum staff of five at work.)
"The majority" of cars must be sold online or by telephone, and cars must be delivered, at buyers' homes, after being sanitised.
Only from 8 June will dealerships be allowed to operate at 100% capacity.
Once they arrive at dealerships, cars may move between dealers only within the same province. In similar fashion, car owners are required "to maintain or service their cars within their own municipal boundaries unless in case of extraordinary circumstances."
Car services for everyone – when due, and nothing cosmetic.
The new Level 4 rules allow any repairs required for safety or roadworthiness, and routine servicing for everyone, not only essential services workers.
But a service interval or milage must have come due; no early services are allowed, and cosmetic repair work is specifically excluded.
Any business that helps repair cars may also operate under the rules, specifically including auto electricians, tyre fitment, windscreen replacement, and autobody repairers.
Those support services must operate under the same restrictions as car dealers. 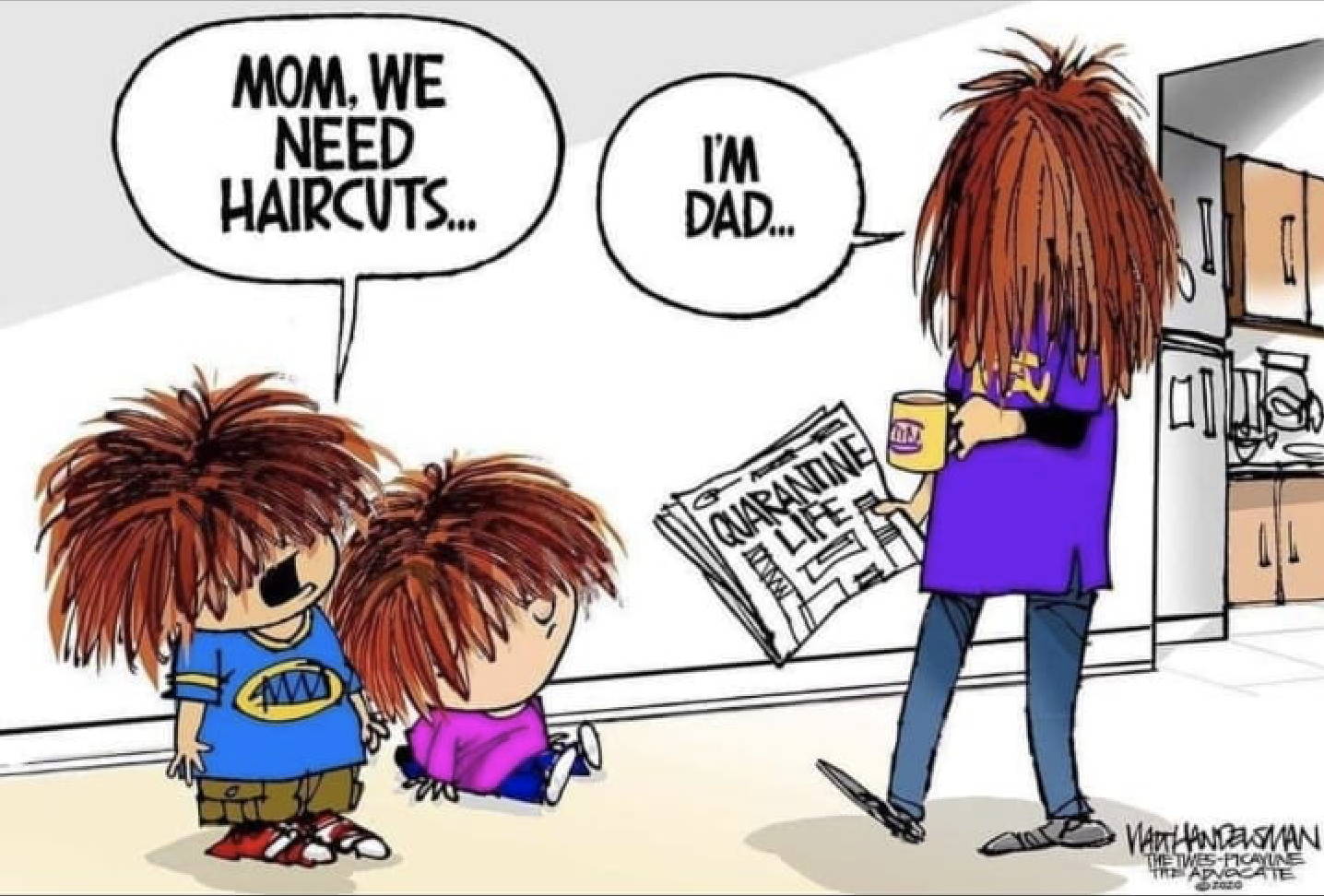 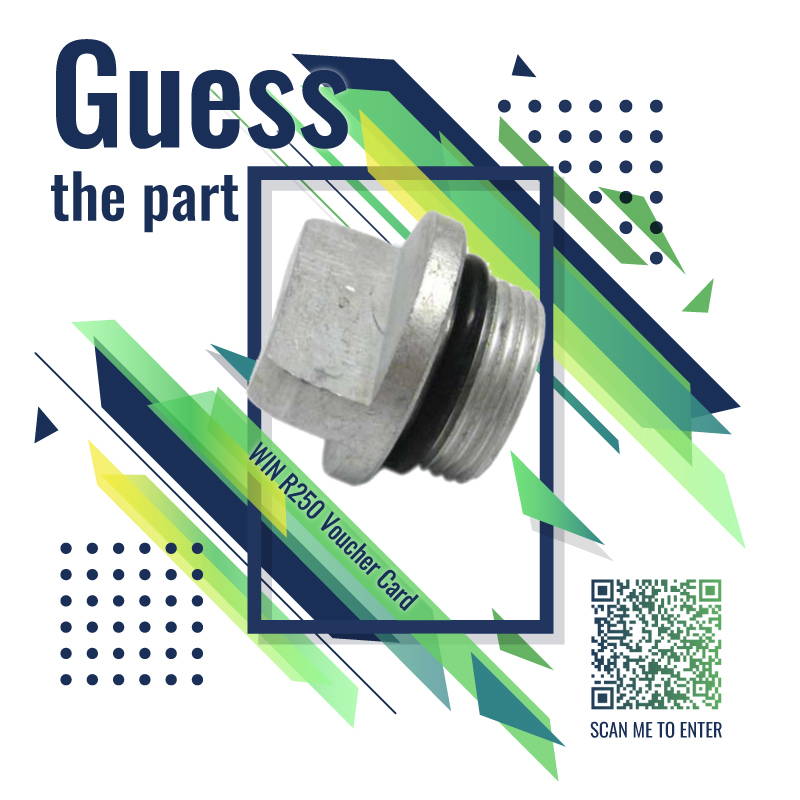 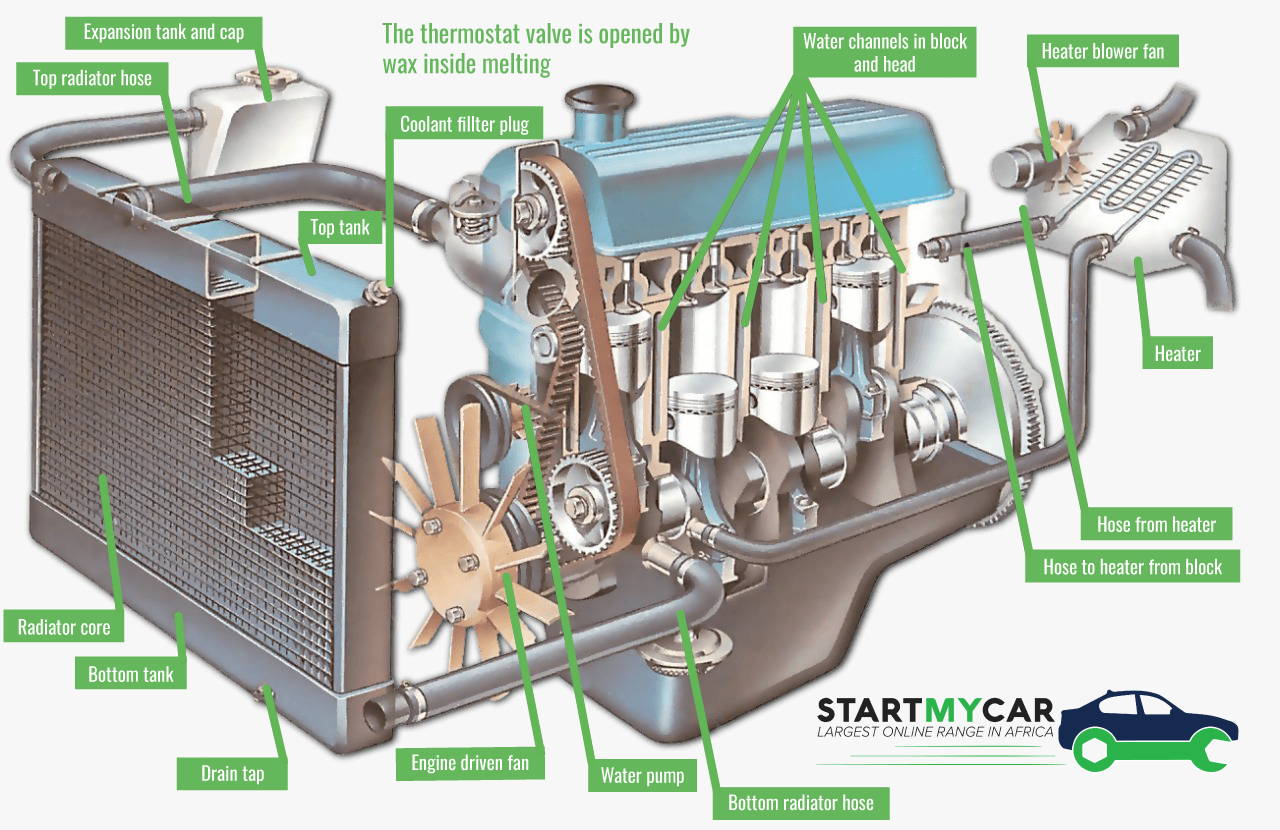 Part 1: What is a Cooling System?

If you are a driving a typical 4 cylinder vehicle on a national road at 120km/h, your car will be producing approximately 4,000 controlled explosions per minute inside the engine as the spark plugs ignite the fuel in each cylinder to propel the vehicle down the N3 for the June family holiday in Umhlanga.
Obviously, these explosions produce an enormous amount of heat and, if not controlled, will destroy an engine in a mere matter of minutes. Controlling these high temperatures is the job of the cooling system.
Almost air cars today employ a water-cooling system. In truth, the water cooled engine has been around for a century and has not changed much since your Great Grandfather’s Ford Model T back in the 1920s. Of course, it has become infinitely more reliable and efficient at doing its job, but the basic cooling system still consists of liquid coolant being circulated through the engine, then out to the radiator to be cooled by the air stream coming through the front grill of the vehicle.
Today’s cooling system must maintain the engine at a constant temperature whether you are in Kuruman, at 45 degrees Celsius or overnighting in Sutherland at -10 Celsius.
If the engine temperature is too low, fuel economy will suffer, and emissions will rise. If the temperature is allowed to get too hot for too long, the engine will self-destruct.
How Does a Cooling System Work?
In this article we will discuss the liquid cooling system. Save for a few first-generation Volkswagen Beetles, and the odd Chev Corvair, very few cars on the road have air cooled engines.
The liquid cooling system comprises the following components:
• passages inside the engine block and heads
• a water pump to circulate the coolant
• a thermostat to control the temperature of the coolant
• a radiator to cool the coolant
• a radiator cap to control the pressure in the system
• interconnecting hoses to transfer the coolant from engine to radiator (and also to the
car’s heater system where hot coolant is used to warm up the vehicle’s interior)
A cooling system works by sending a liquid coolant through passages in the engine block and heads. As the coolant flows through these passages, it picks up heat from the engine. The heated fluid then makes its way through a rubber hose to the radiator in the front of the car. As it flows through the thin tubes in the radiator, the hot liquid is cooled by the air stream entering the engine compartment from the grill in front of the car.Once the fluid is cooled, it returns to the engine to absorb more heat. The water pump has the job of keeping the fluid moving through this system of plumbing and hidden passages.
A thermostat is placed between the engine and the radiator to make sure that the coolant stays above a certain pre-set temperature. If the coolant temperature falls below this temperature, the thermostat blocks the coolant flow to the radiator, forcing the fluid instead through a bypass directly back to the engine.
The coolant will continue to circulate like this until it reaches the design temperature, at which point, the thermostat will open a valve and allow the coolant back through the radiator.In order to prevent the coolant from boiling, the cooling system is designed to be pressurized. Under pressure, the boiling point of the coolant is raised considerably. However, too much pressure will cause hoses and other parts to burst, so a system is needed to relieve pressure if it exceeds a certain point.
The job of maintaining the pressure in the cooling system belongs to the radiator cap. It is designed to release pressure if it reaches the specified upper limit that the system was designed to handle. Prior to the ’70s, the cap would release this extra pressure to the pavement. Since then, a system was added to capture any released fluid and store it temporarily in a reserve tank. This fluid would then return to the cooling system after the engine cooled down.This is what is called a closed cooling system. 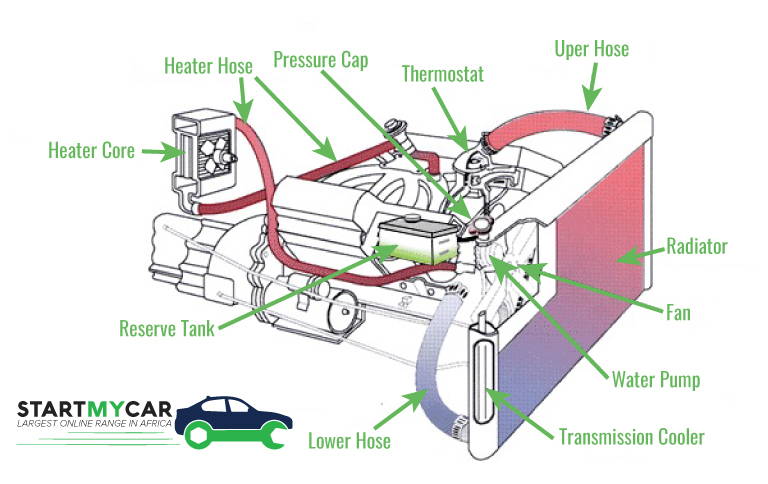 The coolant follows a path that takes it from the water pump through passages inside the engine block, where it collects the heat produced by the cylinders. It then flows up to the cylinder head (or heads in the case of a V-type engine) where it collects more heat from the combustion chambers. It then flows out past the thermostat (if the thermostat is opened to allow the fluid to pass), then through the upper radiator hose and into the radiator.

The capacity of the system is engineered for the type and size of the engine and the workload that it is expected to undergo. Obviously, the cooling system for a larger, more powerful V8 engine in a heavy vehicle (I’m think of the new 5.6 litre Nissan Patrol) will need considerably more capacity than a compact car with a small 4-cylinder engine (Basically a Suzuki). On a large vehicle, the radiator is larger, with many more tubes for the coolant to flow through. The radiator is also wider and taller to capture more air flow entering the vehicle from the grill in front.

The coolant that courses through the engine and associated plumbing must be able to withstand temperatures well below zero without freezing. It must also be able to handle engine temperatures in excess of 100 degrees without boiling. It’s a tall order for any fluid, but that’s not all—the fluid must also contain rust inhibitors and a lubricant.

This article covers the basics of the cooling system, so that in subsequent articles we can take an in-depth look at each component! Start My Car stocks the entire D.O.E cooling range from thermostats and housings to rubber hoses and radiator caps.

Perhaps the takeaway point from this article, especially as the coldest winter months are quickly approaching, is to ensure that we top up our Antifreeze. And not just any Antifreeze. It is worth paying a few extra Rands for something which is so vital to your engine.

Have a look at our featured product, keep safe and keep warm! 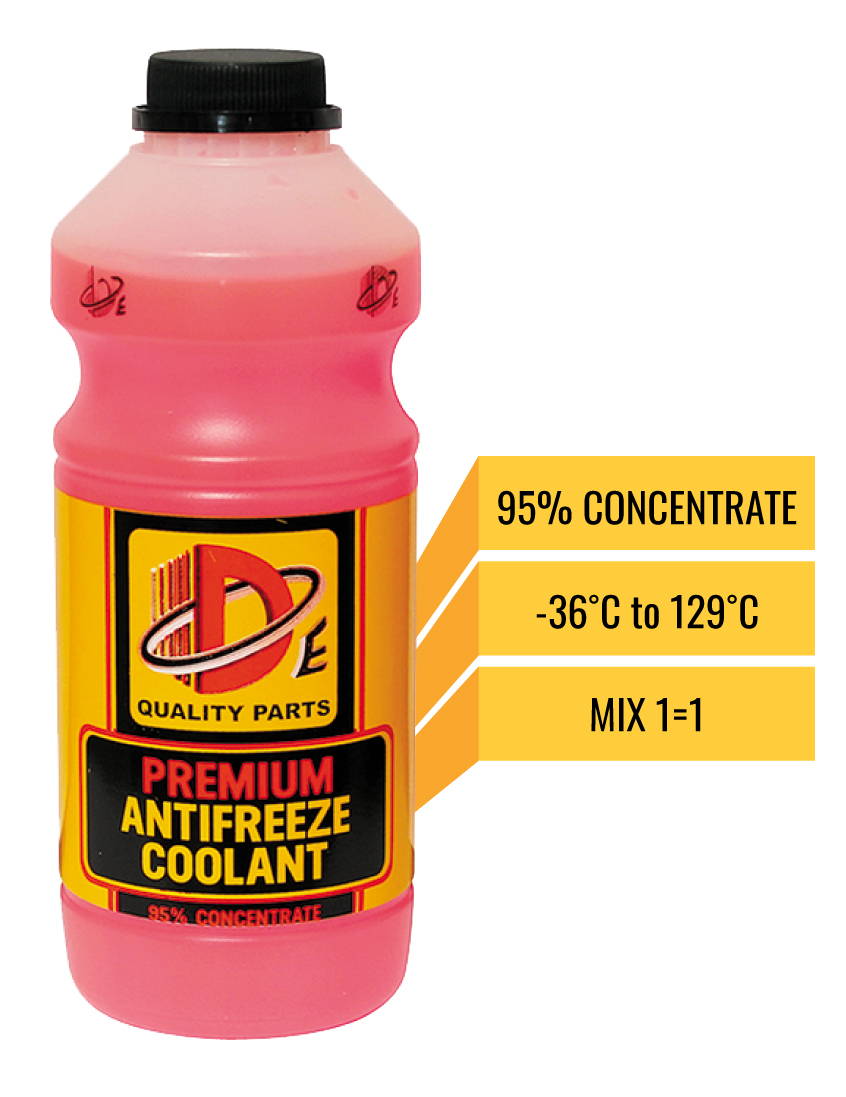